But if you want to indulge a bit during the holidays you can top them with your favorite plant based cheese, i won’t judge! I’m a fan of provolone, pepper jack and smoked gouda from Follow Your Heart but whatever rocks your tastebuds is fine! This walnut parmesan is a great choice too! 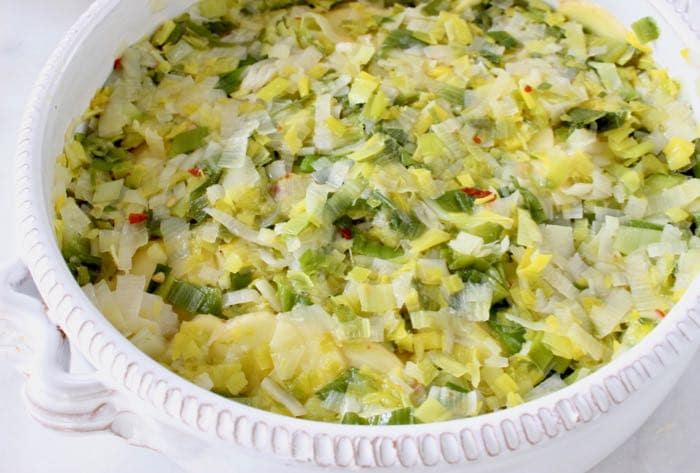 You are going to need a mandoline slicer to slice up the potatoes as thinly as possible. Preferably you’d be able to read the morning paper through those slices but don’t stress over it. Do your best to get them as thin as you can and if need be just increase the cooking time by 15 to 20 minutes or so.

I did a quick soak of the cashews that I then blended into a cheesy cream sauce with nutritional yeast, lemon juice, garlic and water. This is all you need to achieve that cheesy classic flavor and texture au gratin potatoes have.

Let’s talk about the leeks!

Most definitely a favorite staple in my refrigerator, leeks pack so much wonderful flavor I just can’t do without them. Basically a sweeter version of onions but with way more depth.

They are a great source of lutein and zeaxanthin two important carotenoids for eye heath, on top of being rich in fiber, calcium, iron, magnesium, phosphorus, potassium, vitamins A and K.  You can use the entire leek including the mineral-dense little roots / filaments, just make sure to rinse everything well as they are known to be full of grit and dirt.