The ultimate vegan calzone stuffed with veggies, spinach and plant-based cheese. Made with authentic thin crust Italian pizza dough and served with a thick homemade tomato sauce for dipping. These are really easy and simply the best!
Jump to Recipe
go premium!Love recipes, hate ads?
$9.99/year. No ads.

“ Calzone”  is literally translated from Italian as Stocking or Trouser, but when it comes to food it is actually a savory turnover originated in Napoli, Italy.

A pizza pocket of sorts, made with pizza dough, stuffed with cheese (plant-based of course), vegetables or meats (vegan cruelty-free of course) and then oven-baked and served with a thick marinara sauce on the side. If you asked me the spinach and cashew ricotta Calzones are the real deal too.

Calzones can be made without the oven (like yours truly does often), using a hot cast iron griddle/skillet instead. It’s definitely faster this way plus it gets those nice grill marks and adds a little hint of smokiness.

I stuffed mine with mini sweet peppers and scallions today but you can be a rebel and go for any assortment of veggies. Roasted broccoli, mushrooms, eggplant, capers, tomatoes all are delicious especially when combined with some vegan Italian sausage, meatballs or vegan buffalo chicken.

It’s the holidays after all, so really, you can have whatever you like!

P.S. If you make this recipe please remember to come back here to rate it, snap a photo and tag me with #VeggieSociety on Instagram!

How to Make Vegan Veggie Calzone: 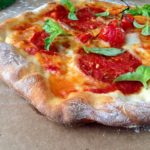