A classic Valencian rice dish from Spain traditionally made with short grain white rice and seasoned with saffron. This is a cruelty free version therefor no animals have been harmed in the making of this recipe. No seafood, no snails, definitely no rabbits because they are our friends and we don’t eat our friends.
Instead I used a super flavorful Italian sausage made entirely from plants. Replace the seafood with a couple of teaspoon of dulse flakes to achieve a fishy flavor if that’s what you are after, I think it is perfect as it is.

Traditionally a short grain Calasparra rice is used, other common varieties include:

I chose to go for brown rice instead to make the dish healthier and because that’s what I had in the pantry. Short grain brown rice is also lovely if you have it around. White rice would result in a creamier texture similar to a risotto but lacking in both flavor and nutrition.

What is La Paella ?

The name of the dish comes from the shape of the round and flat pan it is cooked in: “ la paellera ”. You can however use any large and shallow skillet you have in your kitchen right now and still make some magic happen. Like yours truly, work with what you’ve got.

My stainless steel and cast iron skillets work great and they yield a thin caramelized brown crust on the bottom also known as “SOCARRAT”  just like a traditional paella pan does. You do not need a special paella pan to make an amazing paella!

No oil is required to make this recipe, however keep in mind that whatever plant based sausage you are using most definitely will have some oil added already.

The most important spice in paella: the Saffron!

Whatever you do just don’t skip the saffron. You can use any veggies you like here (zucchini, eggplant, asparagus, broccoli, green peas etc) so long as you cook the rice in a saffron broth. It is what gives the paella its authentic beautiful golden color and the floral aroma. Do not leave it out no matter what!

this Vegetarian Paella Recipe or Paella de Verduras is:

P.S. As always if you make this recipe come back here to rate it, snap a photo and tag me with #VeggieSociety on Instagram it always brightens up my day ~ Florentina Xo’s 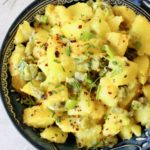