Absorb yourself in a bit of Greek culture when you serve these Vegan Gyros. Opa! This recipe consists of fluffy pita bread, filled with spiced, meaty mushrooms, tomatoes, and cucumbers. Finish it off with a desirable, garlicky, homemade Tzatziki sauce, and you’ll have a tough time sharing.

I’m just here to tell you that it’s ok if you fall madly in love with food. Especially when it’s healthier, fresh, and kind. It’s important you know this before diving into the best vegan gyros you’ve ever had.

Technically, it should be, “What are gyros?” A taco-like meal that’s made using seasoned meat, wrapped in a piece of pita bread, and topped with tzatziki sauce. You’ll often find that the meat is slow roasted on a vertical rotisserie. This is shown on TV and in the movies quite often. For smaller portions, it’s simply roasted in a pan, like this recipe.

Traditionally gyro recipes involve meats such as lamb, chicken, cow, or pigs, but it really Doesn’t Have To! There’s absolutely no need for that weird unhealthy stuff. We are using good for you oyster mushrooms instead as a cruelty-free meat substitute. Much like my Spaghetti Aglio e Olio, Vegan Mushroom Bourguignon, or Vegan Scallops.

In my opinion, it’s always best to make it yourself. It’s a classic recipe of spices you probably have in your pantry, which you can adjust to taste. To me the cumin can be very overpowering in a store-bought mix, so I am very conservative with it here.

It’s important that you taste a little bit of all the other milder spices. It’s what makes the dish magical, instead of tasting just like a big bite of cumin. The thing is, you can always add more if desired, but you can’t take it out. The last thing you want is for your gyros to taste like tacos because these aren’t tacos. This is a nice mix to always have handy in a spice jar in the drawer. 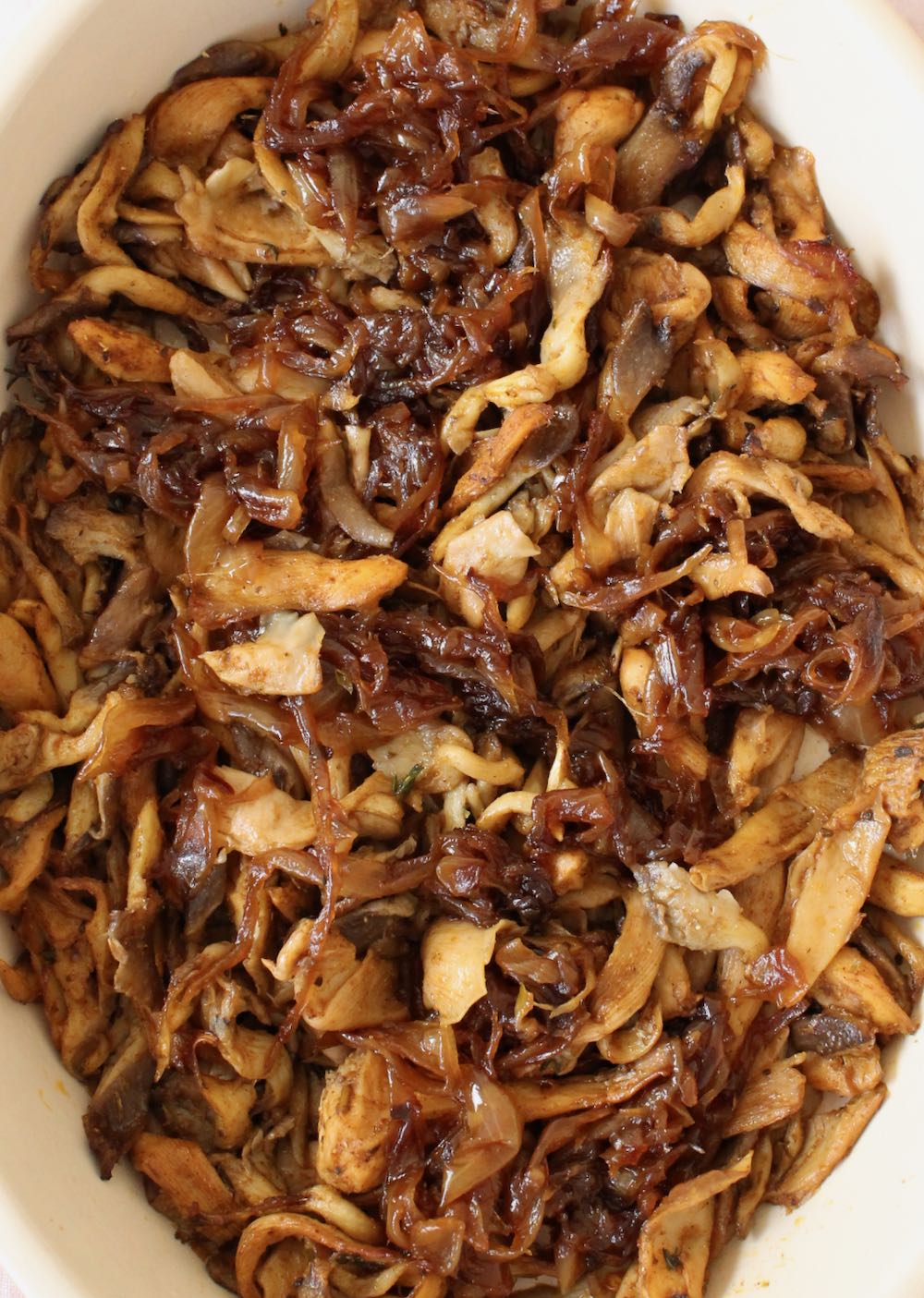 Ok, guys, this vegan meat is just oyster mushrooms. You can use shredded King Oysters here or the more common oyster mushroom mix. You’ll shred them into thin strips and go to town with the seasoning mix.

Definitely don’t skip the onions. They make for a magical combination when mixed together with the oyster mushroom strips. I’ll argue that they’re a large part of why these are the best damn vegan gyros ever. Also if you make a skillet full you’ll have a nice topping to go on your next pizza dough or as a base for a fancy heirloom tomato tart.

You wouldn’t have a gyro without tzatziki. It’s a Greek yogurt based sauce, spiced up with lots of garlic and cucumber. Make a full batch and use it to dip veggies in for the rest of the week or just make more gyros. You can use my Vegan Tzatziki Sauce!

How to Make Vegan Gyros from Scratch